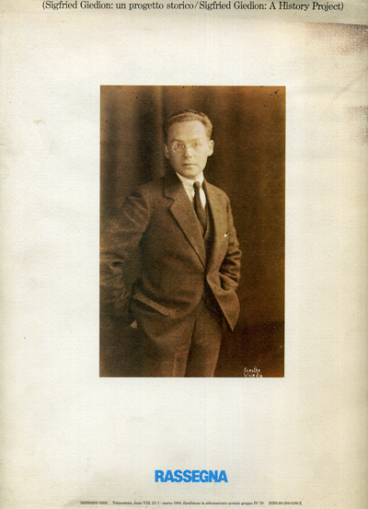 9 x 12 soft cover book with 122 pages and 112 illustrations, some in color. The bulk of the journal [88 pages] is devoted to Sigfried Giedion's coverage of the Modern movement of the early 20th century.

Sigfried Giedion (1888 – 1968 ) was a Bohemian-born Swiss historian and critic of architecture. His ideas and books, Space, Time and Architecture, and Mechanization Takes Command, had an important conceptual influence on the members of the Independent Group at the Institute of Contemporary Arts in the 1950s era.

He was the first secretary-general of the Congrès International d'Architecture Moderne [CIAM]. He has also taught at the Massachusetts Institute of Technology and Harvard University. He was a cool dude and knew everybody.

Under the loose directorship of Vittorio Gregotti, RASSEGNA was an Italian Design magazine underwritten by six Italian firms: Ariston, B&B Italia, Castelli, iGuzzini illuminazione, Molteni and co., and Sabiem. Each issue was devoted to a single designer or theme and lavishly produced, with high-quality reproduction and carefully selected and presented illustrations.