Prostheses for Reconstruction of the Auditory Ossicles 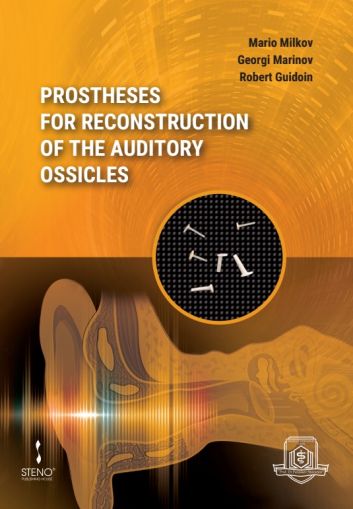 In this monograph, we’re reviewing the history of various designs and the implantation of the first „passive“ auditory prostheses

In a society based upon communication, social hearing is, after all, essential.

Sounds from the external ear canal can be transmitted to the inner ear in two ways: by the tympano-ossicular system (ossicular coupling) and by the direct acoustic stimulation of the oval and round windows (acoustic coupling) (Peake et al., 1992; Merchant et al., 1998).

Luers and Hьttenbrink (2016) paid attention to the fragile bony structures of the ossicular chain. These have no capacity of self-regeneration and for this reason, any discontinuity of the ossicular chain can only be repaired with reconstructive surgery, i.e. ossiculoplasty (Sadй, 1993, Hüttenbrink, 1994). When the ossicular chain is definitely damaged, it may be reconstructed using grafts or prostheses of different kinds (Portmann and Portmann, 1998; Dost, 2000; Luers and Hüttenbrink, 2016). The idea of ossicular chain reconstruction (OCR) emerged and developed; consequently from the principles of plastic surgery of the sound-conducting apparatus proposed by Zöllner (1955) as well as the contribution of Wullstein (1956) to develop both the theory and the practice of tympanoplasty. In 1956, Shea was the first to successfully use a Teflon® replica of the stapes during a stapedectomy (Shea, 1958; Shea and Emmett, 1984). He therefore moved from the concept of grafting to another one using a prosthesis. Through the subsequent contribution of Harrison et al. (1959), House (1960) and Hayden (1961) in the early sixties, a major pathway in the field of OCR has opened. Over the following years, the advances in new biomaterials permitted the manufacturing of commercialized ossicular prostheses of various kinds (Baylancicek et al., 2014; Kalcıoğlu et al., 2015; Luers and Hüttenbrink, 2016).

Nowadays, the implantation of prostheses to replace the non-functional and pathologically affected ossicular chain is a well-accepted surgical technique. The limited availability of homologous grafts for reconstruction of the auditory chain stimulated the quest for new prosthetic medical devices. As a result, there were numerous advances in the manufacturing development of prostheses designed for ossiculoplasty. A great variety of ossicular prostheses for reconstruction of the auditory chain was developed. Several questions of paramount importance were raised to provide guidelines to foster innovation in developing new generations of ossicular prostheses:

b) design of ossicular implants;

d) monitoring of the patients with implanted ossicular prostheses.

In recent otosurgery, a large variety of man-made biomaterials was used (Luers and Hüttenbrink, 2016). None of them is fit for all applications. In general, the biomaterials used for reconstruction of the ossicular chain must present a good degree of biocompatibility and biostability. They must become osteointegrated, with minimal risk of ankylosis. The surface properties, and more specifically the structural characteristics, critically influence the quality of the implant-biological interface. Biomaterials shall to be easily processed as well as retaining their in vivo shape. An adequate sound transmission requires biomaterials of low density (or weight) and high hardness. Every application needs specific biomaterials.

In the medical literature, the validation of different biomaterials is based upon implantation in a variety of animals. Milkov successfully tested implants made of gold, Teflon®, hydroxyapatite and ceromer in the bulla mastoidea of guinea pigs. He highlighted the great interest of this model to serve as a test for ossicular prostheses.

Despite important advances in the reconstructive surgery of the middle ear, hearing restoration faces its limitations due to destruction/dysfunction of the complex anatomical system – middle-ear cavity – auditory (Eustachian) tube – tympano-ossicular system (Beutner and Hüttenbrink, 2009). As consequence from this, in some patients, hearing restoration, with conventional ossicular prostheses (so called „passive implants“), is severely limited. This fact provoked the increasing introduction in the middle ear surgery of so called „active implants“ (Hüttenbrink, 1999; Zenner, 2000; Magnan et al., 2005). According definition of Zenner (2000), „middle ear implants whose function depends upon external energy supply are classified as active“. As Snik et al. (2005) note, further development in a product technology in recent years has led to a broader range of indications for active implant application in clinical practice (Snik et al., 2005).

In this monograph, we’re reviewing the history of various designs and the implantation of the first „passive“ auditory prostheses. Their development, the bench research and the preclinical validations in experimental animal models are also examined.